I'm not dead. But Romance is.

Has it really been over half a year since I last updated this blog? Holy procrastination, Batman! People must have been thinking I was dead - which I fortunately am not. However, my latest project is... well, very much alive, but its name is

Romance is Dead is a short, slightly macabre and very cute story about... well, life, death and everything in between these two. It takes place in the city of New Orleans, one late October, disturbingly close to Halloween, when, as everybody knows, things tend to happen that somehow breach the boundary between this world and the next. Thus, the title screen displays a graveyard. 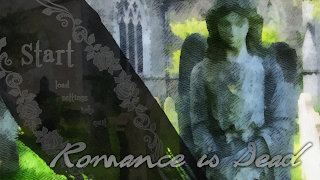 Protagonist of the tale is Madelaine "Maddie" Washington, student of biology at UNO (that's University of New Orleans, not United Nations). Biology is the science of all living things, and Maddie's life currently strongly focuses on studying that subject. Unfortunately, her love life isn't exactly up to snuff, so to speak, and Maddie has been going through quite a few unsatisfying relationships in the past, with her most recent breaking up only a few weeks ago. Because of that, her opinion of such relationships can be summed up quite handily: 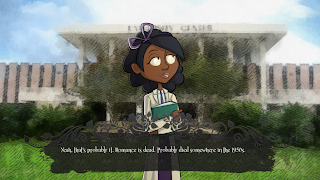 Of course, there wouldn't be much of a story if Maddie's views on that didn't get shaken over the course of it, and responsible for these tremors are a few very unusual people. The first of them is Adam: 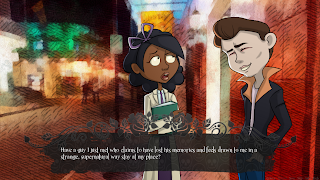 Adam looks a little like James Dean in his prime, and his behavior and speech only add to that picture. He claims to feel inexplicably attracted to Maddie, which is one of the stranger pickup lines she has heard - especially since Adam doesn't seem to really want to pick her up. Or... does he want to, and it's just a very clever act? 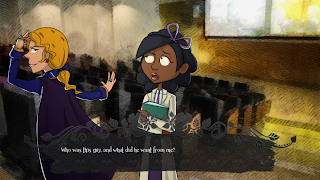 Maurice has all the glamour and poise of a French aristocrat, including the natural charm. He seems to believe that Maddie has a secret she doesn't wish to share but that he is very interested in unraveling. And aside from that, he may also have another interest in Maddie... 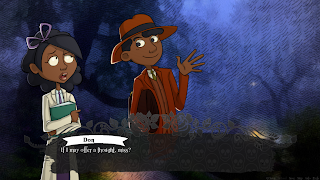 Don is one of Maddie's fellow students, a genuinely nice young gentleman who treats her with the utmost respect. He studies engineering and would be the most normal, unassuming of the three people Maddie meets if he didn't have... well, a lack of physical presence in general and a lack of lower body in particular. And an interesting history to go with that.

All characters were designed and drawn by the incredibly talented and fast Card-Queen of the Lemmasoft Forums.

I usually don't make a lot of fuss about the user interface, but this time, my UI artist Luce Jumble really outdid herself. I mean, even our settings screen looks amazing! Have you ever seen a so tastefully macabre settings screen such as this? 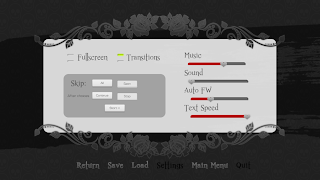 With such beauty for the eyes and a wonderfully morbid dark jazz soundtrack, Romance is Dead may not be my longest or my best work yet but certainly my most stylish. Download it here - as with most of my works, it's free!
Posted by Taleweaver at 6:34 PM

I very much look forward to your feedback. Please keep your comments civil - this is pretty much an all-ages blog.